Bryden Wood’s Design to Value approach means we are always looking for new ways to deliver the best value solutions for clients. This sometimes takes us in unexpected and surprising directions. For example, one longstanding client of ours is an industrial plastics manufacturer who is strongly focused on improving their sustainability. For this client, Bryden Wood have designed facilities with excellent environmental performance, introduced green landscaping throughout their site and undertaken studies into the feasibility of achieving Net Zero carbon for the site’s base load energy consumption.

However, none of these initiatives addresses the ‘elephant in the room’: the industrial plastics manufacturing process itself, which is heavily reliant on the carbon-intensive chemical production sector.

Chemical production is set to become ‘the single largest driver of global oil consumption by 2030’ according to a 2019 paper in the Proceedings of the National Academy of Sciences1. The chemical industry uses around 28% of all industrial energy and 10% of global final energy2, which shows how vital it is for the industry to change if we are to reduce carbon emissions and help combat climate change.

This is a lot to accomplish, but it offers Bryden Wood an opportunity to make great steps towards this goal and lead by example, by promoting methods to reduce emissions in the chemical engineering sector.

We started studying this problem to see if it would be possible to produce plastics more sustainably. And we have found that existing carbon capture technologies have the potential to change the way industrial plastics are produced.

As we know, industrial plastics are used in many items we use every day. From nylon stockings to Teflon-coated cooking pans, we all use these types of plastics in some form or other. Industrial plastics have become so prevalent precisely because of their wide range of uses. And while they have been historically carbon heavy in their production, they also have the potential, in fact, to lessen carbon emissions in certain areas.

One positive example we are seeing of the increased use of industrial plastics is engineered plastics adding benefit as alternative building materials. By reducing costs through lightening loads, and acting as better insulators to increase heating efficiency, industrial plastics have clear scope to deliver substantial cost benefits. These materials are useful, therefore, and we shouldn’t discount their potential in this area because of their historically carbon emission heavy synthesis.

Our goal, therefore, is to find ways to make the production of industrial plastics less reliant on fossil fuels and to reduce their carbon footprint as much as possible.

The way we are focusing on achieving this is through carbon capture, which reduces emissions of greenhouse gases (GHG) during synthesis by capturing emitted carbon dioxide and reusing it in other stages of the plastics manufacturing process.

There are two main methods of carbon capture: carbon capture and utilisation (CCU) and carbon capture and storage (CCS). The difference between them is that CCS takes the CO2, and stores it to be sold on to whoever needs it later, whereas CCU reuses the collected CO2 almost immediately. There are benefits to both systems, but CCU has less potential for wasted carbon dioxide. Both methods have been used at commercial scale with ‘undisputable technical and operational success for decades’ in the North Sea, North America, Australia and elsewhere.3

Naturally, this isn’t a closed loop; feedstock will always need to be provided. But given that, as of 2019, carbon feedstock equated to 58% of the usage of carbon-based materials like crude oil and other fossil fuels in the industry, it would be a positive step to use carbon capture to reduce the amount required, and therefore begin to lower the carbon footprint of the industrial plastic produced using these methods.

Chemicals such as formaldehyde and potassium carbonate that are used in the production of plastics such as PEEK, POM, PTFE, and PVDF can be produced with captured carbon dioxide instead of fresh carbon feedstock. By reducing the need for carbon feedstock by reusing captured CO2, we will make progress toward a carbon neutral synthesis of industrial plastics.

A study by Gabrielli et al, investigating the benefits of carbon capture, used the visual below to show how each system works and how the captured carbon is being reused (Figure 1).

Figure 1: via Gabrielli et al: illustrating a comparison of ‘business as usual’ chemical production against CCS and CCU via direct air capture with carbon storage (DACCS) techniques. Also illustrated is a biomass-based option.4

There are limitations with these carbon capture methods, however, as CCS by itself isn’t enough to bring us to the designated targets for the industry. CCU is the better of the two methods to take meaningful steps towards carbon neutrality, as it puts the carbon to use straight away with less risk of it escaping. The issue with these methods is that there is still work to be done on the technology and estimations for using the captured carbon in directly transforming it into hydrocarbons.

A good measure to show how close a technology is to being used is the technology readiness level (TRL). This is a scale of 1-9, where 1 is the concept and 9 is a system ready to be implemented. At the time of writing, the TRL for carbon capture is still relatively low, at 7 in the validation stage. It will require international and governmental investment into research to make the process more efficient and faster, and to diversify which materials specifically could be produced from the captured carbon.5

On top of this, other practical constraints include social acceptance of greener methods, including electricity capacity6 and governmental support and policy inclusion, and for uptake in relevant sectors and industries, such as industrial plastic production. Continued research into these technologies, alongside more evidence of cost benefits, may help in incentivising industries to adopt these technologies.

It is not only the reduction in GHG emissions that we need to focus on for CCU to impact the production process most efficiently. The improvement in producing ‘green hydrogen’ through the electrolysis of water is helping increase the benefits of CCU by reducing the industry’s demand for electricity in producing some chemicals. Hydrogen is required to produce ammonia, for example, an important material in many plastic production processes. The benefit of water electrolysis is that it uses 7.5% less electricity than other methods.7

Even though CCU is currently at a low TRL, as funding comes in and progress is made, the development of this method, in conjunction with water electrolysis, would see greater reductions in industry electricity usage to perform these reactions and, therefore, greater reductions in GHG emissions.

Even with all the progress into modern renewable power, including wind, solar, biomass, geothermal and ocean power, these only account for 1.7% of global final energy demand.8 To reduce our CO2 emissions correctly, industrial plastics production would ideally be designed with sustainable electricity production in mind to power their production in conjunction with CCU to reduce the carbon footprint further.

We know we have a long way to go in our efforts to negate climate change and, as discussed, the benefits of carbon capture when used effectively will have a significant impact on the footprint of the plastics industry. The goal of using carbon capture in conjunction with other greener methods like green hydrogen and greener electricity is one we should strive to include more in future projects. Gabrielli and his colleagues are determined that the industry can be defossilised and that carbon capture is the key. For the sake of our planet, we must believe that too.9

As we evolve our perspectives to consider how to coexist with our planet and not just take from it, we can see that industrial plastics have the potential to help make strides in reducing the carbon footprints of what we build, live in and use. This is, after all, the spirit of Bryden Wood; to challenge what exists for the sake of progress. Therefore, I hope that we will continue to design for – and use – carbon capture and its benefits for a long time to come. 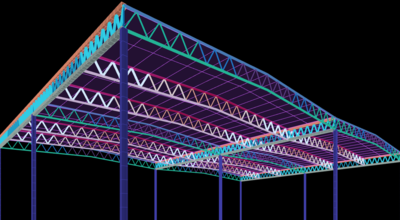 Automation in construction: an off-site case study of the FASTtruss system with DES